Hailing from Stansbury Utah, father of 5 year old Lily Anderson who will miss him dearly (and expects multiple additions to her postcard collection) Chuck Anderson will be joining the 48 State Ride Against Child Abuse June22 – July 2 2018. In fact, Chuck’s to modest to say it, but the ride would not be happening without him.

Chuck spent his early adult years in the Marine Corps as an Infantry Squad Leader for a machine gun section, when Chuck returned to Utah he began looking into people to ride motorcycles with to continue a bond of interests with others. At that time motorcycle get together and meetups were far and few between, after meeting 6 likeminded individuals he was able to start and grow multiple motorcycle pages on Facebook in Utah growing to over 2,000 members. The main goal was to provide a place where riders could meet up and discuss motorcycles and rides outside of a “club” setting where it didn’t matter what kind of bike you rode, today those pages are still growing and promoting local events.

Chuck was introduced to motorcycles through his father Richard Walkenhorst, Richard helped Chuck’s mother Stephanie Walkenhorst get further into motorcycles and from there motorcycles became a family affair. Chuck currently has over a dozen family members that ride, from cousins to aunts, uncles, everyone who shows an interest is converted immediately. 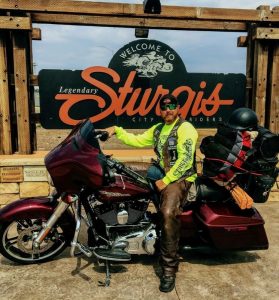 Chuck and Grant met through a Facebook motorcycle page and both showed an interest in pushing themselves in completing this grueling ride, once the ball started rolling the Utah Valley Exchange Club was introduced and focus was shifted from personal interest to supporting the children in the local community.

Chuck Anderson is being sponsored in this ride by his employer Hexcel (thank you Hexcel!), and though the experience will be an amazing one Chuck looks forward to bringing awareness to the child abuse crisis and doing everything he can to help combat the issue by raising awareness and continuing raising funds in support.

Chuck in closing would like to remind everyone to do something bigger than themselves once in a while, and always support your local community and motorcycle shops.

“Making others feel good, feels good. give it a shot”