Grant’s 48/10 adventure actually almost five years ago when he read the subject line of an email from his frend, Steve: “How Crazy Are You?” He immediately new “Doc” was working on another Ironbutt. Grant’s response after learning it was to be the 48/10? “I just might be that crazy.” His wife’s reply? “Noooo.” Here’s Grant’s story in his own words:

Maybe motorcycles suit me because they are a wonderful mix of the rational and the irrational. So economical, so exhilarating. So practical, so foolish. I rationalized my way onto a Harley-Davidson nine years ago, when my pickup truck was bleeding me dry at the pump. “Maybe I should start taking the bus. But I would need something to get around during the day. What happens when I need to run to court? A bicycle? No, too sweaty. A scooter? Sure. Did you know that scooters are actually more dangerous than motorcycles? They lack the power necessary to move with traffic at highway speeds. Really? Well, that’s what some guy on the internet said. Works for me. Plus if I have to go to Salt Lake for something, I couldn’t go on a scooter.” Boom! I had talked myself into getting a motorcycle. Completely practical, right?

From there it was a purely emotional step to get the Harley. My grandfather was a Harley dealer 100 years ago. Here he is with his “business card” showing him with a 1914 Model. 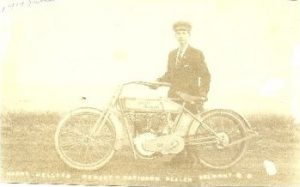 I rode some other bikes but they just didn’t feel the same. When I took that first test ride on my 2005 Super Glide, I was hooked. There was something of a connection there with Grandpa Hellyer. More than that though, was the sensation I remember from a recurring dream from my childhood. You may have dreamt, as I did, of flying. My dream flight wasn’t the superman, fly over tall buildings kind stuff. In my dreams I flew very low, almost as if I were hovering just above the ground. I think I will never forget those dreams, nor the identical sensation I felt when I rode my motorcycle over Ironton hill. Hovering just above the ground, the wind in my face. Flying.

The next summer Harley-Davidson had their HOG rally in Billings, MT, where Grandpa had lived and I had graduated high school. I had to go. I talked my middle daughter, Cami, into joining me. Despite frigid temperatures as we rode through Yellowstone after dark, she endured the trip cheerfully and was an ideal traveling companion.

That started a tradition of my daughters joining me on motorcycle tours. The first group ride was when I met Doc– my wife’s parents’ neighbor’s dentist (so we’re practically related). My father-in-law had invited me to join them on a tour of southern Utah. On the first night, at a grimy motel in Panguitch, Doc initiated the new members of the Bar-T Riders (a title I could not earn for several more trips). Quite the showman, I thought. I’ve since joined Doc on rides to Jackson Hole, Glacier National Park, Jasper/Banff, and the Black Hills – each time joined by one of my daughters. A few years ago Doc and I did our first Ironbutt – a Saddle Sore 1000 across the Nevada desert and back. There is a lot of show there, but even more “go”.

Maybe because I had started to enjoy recreational riding so much, I felt a growing need to balance that fun time with something more useful. In 2009, after I upgraded to a Road King Classic, rode to Glacier National Park, and got my first taste of huckleberry ice cream at the Big Dipper in Missoula, I helped to found the Ride Against Child Abuse. My daughter Ceci joined me on the very first ride, which was highlighted by BYU coach Bronco Mendenhall joining the ride: 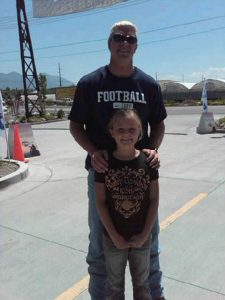 It is fitting, then, that she should join me on this 10th Anniversary of the Ride Against Child Abuse.

Considering my schizophrenic desire to be involved in something at once beneficial and yet ridiculously impractical, when Doc asks, “How crazy are you?” the only possible response is, “Just crazy enough.”

⇐ In the future, everyone will be world famous for 15 minutes.
Introductions Continued — The Arizona Angels ⇒
© 2020 Ride Against Child Abuse