Something I’m reluctant to put in print is the nickname Doc gave me when I was “initiated” into the Bar-T Riders a few years ago.  Evidently, I have a tendency to need an extra minute or so when everyone else is ready to go.  As a result, “Fiddle Fart” has stuck.  :/  On this trip I really wanted to try to live that name down.  So I wasn’t thrilled when, following our agreement to leave at 5:30 a.m., the first thing I saw Wednesday morning was Doc’s name on my caller ID at 5:49.  He and the other guys had been putting his bike back together with a little duct tape following the elk incident.  I told them to go ahead, and Cami and I would catch up.

We left Clayton, NM about 20 minutes after the others, and were soon in Texas. 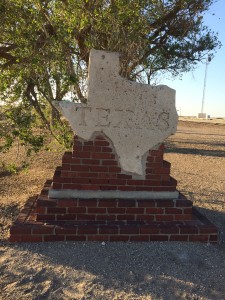 We took a route that skirted Amarillo to the north and west and made a quick stop in Claude, TX for fuel and documentation of our visit to the Lone Star State.  Crossing the panhandle and into Oklahoma we saw lots of what we expected — relatively barren praries dotted with oil pumps.  What I did not expect was the beauty of the Oklahoma skies! 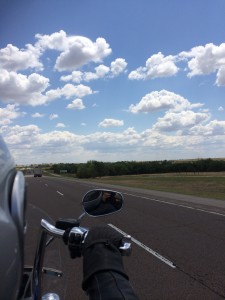 I also did not expect to get a text from Doc revealing that they were now about half an hour behind Cami and me.  They had stopped in Amarillo to wash the elk off Doc’s bike and then in Shamrock to get a part that had blown off Andy’s bike.  As we cruised through Oklahoma we trade text messages until we got to Oklahoma City.  I was inclined to try to hook up with them someplace on the other side of the city, rather than try to figure how to meet in an unfamiliar city criss-crossed with freeways.  Andy, however, was pretty insistent that we meet up in Edmond, just northeast of OKC.  This frustrated me, as I wanted to get clear of the city and find a quiet place that we could wait and rest.  Baxter Springs, KS would have worked well for me. Nevertheless, we figured out a way to get to the same exit in Edmond and when we did I learned what Andy was up to.

Andy had arranged for his sister-in-law to meet us with lunch!  Since we left Utah we had eaten nothing but trail food for a day and a half.  It evidently doesn’t take much in the way of food deprivation to make a sandwich look like a feast to me.  These sandwiches were exceptional and Andy’s sister-in-law is an angel.  Thank you!

Leaving Edmond we made our way to the Missouri and Kansas borders.  Rolling up to the first toll booth I noticed that my toe shift lever was “drooping”.  It was still attached, but it had fallen from its normal position.  I made a mental note to tighten it at the next stop.

We crossed into Missouri briefly, took a right turn, and were immediately in Kansas.  A few more miles put us in Baxter Springs.  What a great little town. 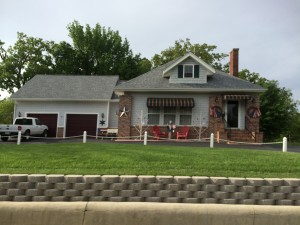 We backtracked into Missouri and headed south on I-49 through Neosho and into Arkansas.  Somwhere along the line I actually took the time to look at my shift left.  I tightened it up and thought I was in good shape.  It didn’t hold, however, and continued to slip.

Northeastern Arkansas was gorgeous.  We all agreed that a return to the Ozarks with more time to spend there is definitely in order.

Darkness fell upon as we rolled south towards Fort Smith.  I’m a big fan of the movie(s) “True Grit,” so riding in this area had me thinking of Lucky Ned Pepper and his gang hiding out in those mountains.  We fueled in Alma, just east of Fort Smith, then headed east, back on I-40, toward Little Rock.  By the time we got to Morrilton (just west of Little Rock) just a little after 10:00 p.m. Cami and I were pretty sure we were not going to make it to Vicksburg that night.  We knew we could make the next stop, in Pine Bluff, but we were not up to three more hours after that.  We let the other guys know that we were planning to stop for the night in Pine Bluff.

By the time we reached Pine Bluff, Doc and Marc decided they would stick with us there for the night.  Andy and Jared, however, were too wired at that point to stop for the night.  Although it was midnight local time, it was “only” 11:00 Mountain Time.  They decided to press on to our planned stop in Vicksburg.

Fueling in Pine Bluff we became acutely aware that we had reached a different culture.  Despite my pre-ride call to American Express, the card reader at the pump would not accept my card.  I headed in to speak to the clerk about it and discovered that the convenience store was kept locked.  He had to unlock the door to let us in.  A couple of young girls were there chatting with the clerk.  I think I could understand about 1 word out of 80.  The clerk was obviously fluent in their language, but when he spoke to us was as well spoken as any 20 something you would expect to meet anyplace in the country.

We got fueled up at the end of our day of approximately 970 miles.  We were just shy of a second 1000 mile day, and were right around 2100 miles for the first two days.  It was a good day, but we went to bed 175 miles and approximately 3 hours shy of our goal for the day.  We went to bed exhausted and more than a little worried about Andy and Jared.  Everybody hits a wall eventually.  Was theirs waiting for them someplace on the road to Vicksburg?