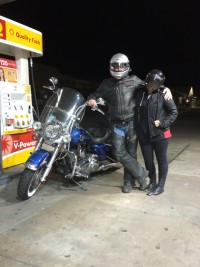 From the time Doc first proposed this ride, I was on the fence about going.  I knew it would be an incomparable adventure and an experience I would not likely duplicate in my lifetime.  On the other hand, my first choice for a two week motorcycle ride would not include 7,000 miles of interstate or skipping past the Blue Ridge Parkway, the Tail of the Dragon, the Ozarks, the Black Hills, Yellowstone, etcetera, etcetera, etcetera.  So, it seemed only fitting that the first song that came up on iTunes Radio after we filled the tank was The Clash, “Should I Stay or Should I Go?”  Let’s go! Starting in St. George, Utah allowed us to quickly move into Nevada, California, and Arizona.  The first leg of the journey, down to Henderson, NV was all freeway, and all in the dark.  Las Vegas was lit up like a treasure chest.  We got our first fill up and then, as the day’s first light emerged, rolled on.  From Henderson we headed south towards, Needles, California.  The sun was coming up on our left, casting motorcycle shadows the accompanied us down the highway. 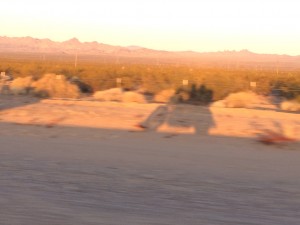 There was a little bit of construction around Needles.  Some of our group might have weaved through the cones, and somebody might have knocked a cone over, which (if that had happened) might have actually broken off his highway peg.  I would not have expected that result.

As we rode south the wind was at our backs and we made excellent time.  Turning east to make our way across Arizona brought the challenge of gust crosswinds.  These continued across the entire state.  I’ve traveled from Phoenix to Utah many times, and knew to expect cool whether around Flagstaff.  I did not expect it to last all the way across Arizona and New Mexico.  In Williams we bundled up as best we could, but soon discovered that Cami’s gear was not going to be adequate for this trip.  We were still cold in Winslow (where we didn’t get a chance to stand on the corner because of large crowds down there) and had not warmed up much by Gallup. I took advantage of my Sena headset to make a call to the Harley-Davidson dealer in Albuquerque.  They had a heated liner in Cami’s size that they set aside for us.  We swung over there and picked it up while the other guys looked for a place for a bite to eat.  I considered getting some heated gloves but at $215 I decided the price was too steep.

We gassed up, met the other guys, and headed northeast for Trinidad, Colorado. The sun and gone down by the time we got close to the border.  Trindad sits above the Taos ski resort, at almost 8,000 feet.  It’s several hundred feet higher (and miles norther) than Flagstaff.  As we slid into town thermometers read 28 degrees.  My hands, and through them the rest of my body, were thoroughly chilled.  I think I’d have given that Albuquerque dealer $500 for those gloves at that point.

It took quite a while (and some hot chocolate) to thaw me out. The other guys were pretty worried about us.  Andy came in and suggested a “totally MacGyver” solution.  It involved covering my hands with styrofoam cups to keep them out of the wind.  I’m still not sure that wouldn’t have been the best idea, but I wasn’t quite ready for it.  I did take Marc up on his offer of some warmer gloves and we pressed on — a little behind schedule. We backtracked to Raton, NM and then resumed our eastward travel toward Clayton.

As we rode, I noticed a semi truck on the side of the road, then suddenly the tail lights in front of me were brake lights and we were all riding through fluff and blood.  I heard somebody on the intercom exclaim that both of Steve’s tires were off the ground.  We pulled over and learned that Steve had just run over an elk, recently killed on the highway by the semi.  The driver was on the side of the road surveying his own damage and was heading back to pull the poor creature out of traffic.  Until we went back to look for a missing piece of Steve’s lower fairing, I had not even seen the animal.  It’s miraculous that he was not hurt, and that more damage was not done to his bike. 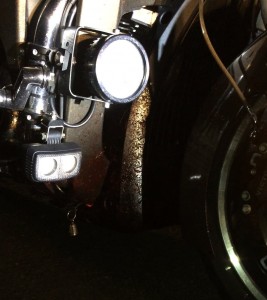 Evidence of roadkill, notwithstanding the candlepower.

We were all grateful to be alive, to have bikes in shape to continue the trip, and to be not too far from Clayton.  We continued on, filled up, and hit the Days Inn.  We made a pact to speak not of the elk until we had all returned safely home. Day 1 was under our belts.  We had traveled more than 1,100 miles and had earned a Saddle Sore 1,000 certification from the IBA.  Ahead of us lay another thousand mile day, the prospect of a Bun Burner 1,500, a Saddle Sore 2,000, and the hope of being in Mississippi by the end of day 2.  After a brief discussion we decide to be kickstands up at 5:30 in the morning and hit the hay.